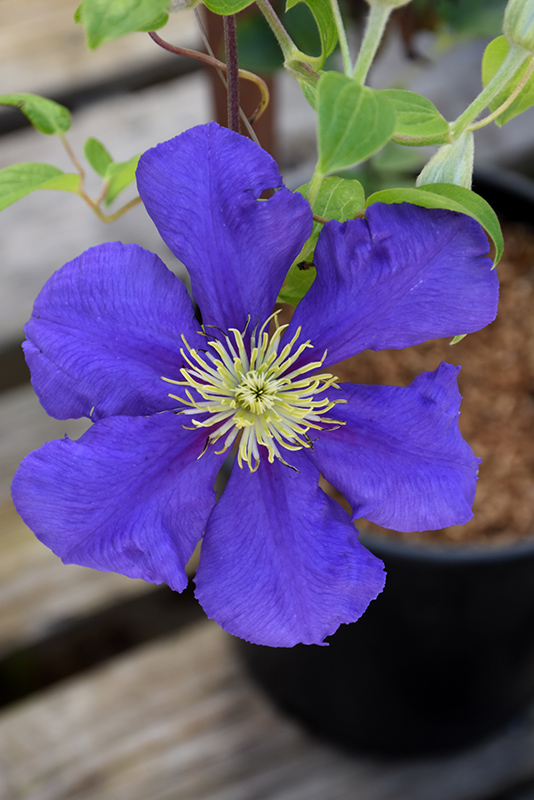 A vigorous and floriferous climber with large and daring velvet purple flowers throughout the summer, one of the toughest varieties and aptly named

General Sikorski Clematis features bold purple star-shaped flowers with buttery yellow eyes at the ends of the branches from mid summer to early fall. It has green foliage throughout the season. The compound leaves do not develop any appreciable fall color. The fruit is not ornamentally significant.

General Sikorski Clematis is a multi-stemmed deciduous woody vine with a twining and trailing habit of growth. Its average texture blends into the landscape, but can be balanced by one or two finer or coarser trees or shrubs for an effective composition.

This is a relatively low maintenance woody vine. It is a Type 2 clematis, which means it will bloom primarily on old wood of the previous season, with a second flush later in summer. Dead and weak vines should be removed in late winter, and remaining vines should be trimmed back to the first buds that are seen to remove dead stems. It is a good choice for attracting hummingbirds to your yard. It has no significant negative characteristics.

General Sikorski Clematis is recommended for the following landscape applications;

General Sikorski Clematis will grow to be about 10 feet tall at maturity, with a spread of 24 inches. As a climbing vine, it tends to be leggy near the base and should be underplanted with low-growing facer plants. It should be planted near a fence, trellis or other landscape structure where it can be trained to grow upwards on it, or allowed to trail off a retaining wall or slope. It grows at a medium rate, and under ideal conditions can be expected to live for approximately 20 years.

This woody vine should only be grown in full sunlight. It does best in average to evenly moist conditions, but will not tolerate standing water. It is not particular as to soil type or pH. It is somewhat tolerant of urban pollution. Consider applying a thick mulch around the root zone in both summer and winter to conserve soil moisture and protect it in exposed locations or colder microclimates. This particular variety is an interspecific hybrid.

General Sikorski Clematis makes a fine choice for the outdoor landscape, but it is also well-suited for use in outdoor pots and containers. Because of its spreading habit of growth, it is ideally suited for use as a 'spiller' in the 'spiller-thriller-filler' container combination; plant it near the edges where it can spill gracefully over the pot. It is even sizeable enough that it can be grown alone in a suitable container. Note that when grown in a container, it may not perform exactly as indicated on the tag - this is to be expected. Also note that when growing plants in outdoor containers and baskets, they may require more frequent waterings than they would in the yard or garden.